A confluence of economic depression, taxes and debt has created conditions for a massive selloff of Greek real estate. 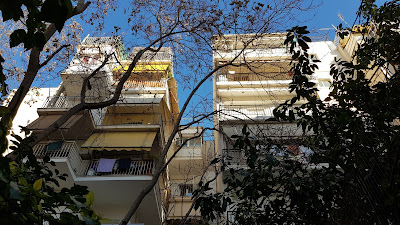 A NEW study confirms suspicions that taxation and debt are prompting Greeks to sell off property they spent previous generations amassing. Property ownership has fallen for the first time in decades, and half of all Greeks don't think it's worth buying property any more. The likely result: A massive selloff to overseas buyers.

The latest study by the Hellenic Property Federation has found that:
• Ownership has fallen by 7.7pc during Greece’s ten-year economic crisis, to 74pc
• 42pc of Greeks would rather buy, versus 49pc who'd rather rent
• Three quarters of landlords have lowered rents during the crisis, yet half of all renters remain in arrears with payments
• One third of all owners plan to sell in the next two years, three times the pre-crisis figure
• Three quarters of owners find crisis-era austerity taxes on property unfair.

The real estate market has suffered a series of blows since the Greek debt crisis began in 2008.

1. ENFIA, a property ownership tax, was introduced in 2011 to offset falling income tax revenues. It is meant to raise €2.65bn a year, but often raises more. Property-rich but cash-poor Greeks have been forced to sell properties at bargain rates in order to raise money to pay the tax.
2. As unemployment rose to a high of 28pc in 2013, rented residential and business properties were left vacant. The combination of the economic depression and property tax meant that ownership became a liability rather than an asset. Many properties went up for sale, flooding the market and further depressing prices.
3. The depression also created a rise in non-performing loans, many of them mortgages. These now stand at just €105.2bn, or 60pc of GDP, according to Bank of Greece figures. The banking system plans to reduce these by €40.2bn by the end of 2019. Much of this - €11.5bn – will come from liquidations, meaning a dumping of loan collateral on the real estate market this year and next. A further €7.4bn will come from sales to debt collectors, likely leading to further foreclosures. The government has, at the behest of the Eurozone and International Monetary Fund, taken property auctions out of physical courts and put them online in its January 15 omnibus bill, where no amount of protests can delay or stop them.
4. The short-term rental platform Airbnb gave Greek owners temporary relief. These rentals have until now been essentially tax-free, offering a lifeline to owners who have been able to reschedule mortgages and keep up with payments for the first time in years. But the Independent Public Revenue Authority (AADE) is now launching a platform for such rentals to be registered and taxed by as much as 45 percent. The expected tax income is €57mn. Airbnb income averaged $2,787 per registered Greek property last year, the company says.

The combined pressures – property tax, inability to find paying renters, the commencement of foreclosures in earnest and the closure of tax loopholes – mean that a slate of Greek property will come on the market this year an next. According to Bank of Greece data, residential property prices fell by 40pc between 2007 and 2016. Whether this round of selling further depresses them remains to be seen.
Posted by John T Psaropoulos at Tuesday, January 30, 2018 No comments:

The prime ministers of Greece and former Yugoslav Macedonia announced their first concrete steps towards rapprochement in more than 20 years at Davos on Wednesday.

Speaking on the sidelines of the World Economic Forum in the Swiss resort, the leader of the government in Skopje, Zoran Zaev, said he would strike the name Alexander the Great from the national airport and main national motorway. The latter will be renamed Friendship Highway, the Greek side said.

In return, Greek premier Alexis Tsipras said, he will move to ratify in parliament a partnership agreement between the former Yugoslav republic and the European Union, as well as membership in a regional body.

Confidence-building measures will also resume, Tsipras said, “in areas such as energy, transport and cross-border contact, with the most important being the opening of the border crossing near the Prespa [Lakes].” Greece shares the idyllic Greater Prespa Lake with former Yugoslav Macedonia and Albania, and has agreed on opening a three-way customs and border infrastructure.

“We don’t just want to solve the problem of the name, but to put the relationship between our two countries on a stable foundation,” Tsipras said. “That means we must first confront irredentism in all its forms, with guarantees that we will leave no window open for similar provocations to arise in future.”

“We want to be partners in the European Union and allies in NATO, to face all the hardships in the difficult era in which we live,” Zaev said. “We, as prime ministers, have the political vision, the sense of responsibility and the courage to find a solution to this problem which has existed for 25 years. The time has come… because it is of vital importance for our prospects of entering NATO and the EU.”

As a NATO and EU member, Greece holds a power of veto against new members, and effectively exercised it in 2008, when former Yugoslav Macedonia applied to enter NATO. Both bodies have told the government in Skopje to resolve its differences with Greece as a pre-requisite to entry.

A brief but painful history

Shortly after communism in Eastern Europe collapsed in 1990, Serbia attacked other constituent republics of Yugoslavia, initiating the federation’s breakup. The European Union’s recognition of Slovenia and Croatia as sovereign states in December 1991, at the behest of Germany, precipitated that breakup.

Yugoslavia’s southernmost state had been called Macedonia throughout the communist era, in what many historians consider an attempt by Yugoslav leader Marshal Tito to launch a territorial claim on the Greek region of Macedonia to the south. In 1991, the regional government in Skopje declared independence as the Republic of Macedonia, and circulated communist-era maps showing the republic’s claim to Greek territory as far as the Aegean, including the city of Thessaloniki.

Greece objected to the new nation’s registration with the United Nations under that name, and it was temporarily registered as The Former Yugoslav Republic of Macedonia, or FYROM. The European Union suggested a composite name that included the term Macedonia, such as “Nova Macedonia”, but the proposal split the Greek government and caused massive demonstrations in Thessaloniki. A Greek trade embargo aimed at forcing its neighbour to relent backfired in 1993, triggering an international wave of sympathy for the nation of two million, and a series of bilateral diplomatic recognitions as ‘Republic of Macedonia’. The last major diplomatic initiative between the two was the Interim Accord of October 1995, whereby they recognised each other’s sovereignty, disavowed any mutual territorial threat, resumed trade and pledged to find a solution to the name issue.

With its strategy and public opinion in disarray, Greece quietly signalled it was willing to open talks on the basis of a composite name including the M-word, but after the 2006 election it was the nationalist VMRO-DPMNE (Internal Macedonian Revolutionary Organisation – Democratic Party of Macedonia) government in Skopje that refused to compromise.

The SDSM (Social Democratic Union of Macedonia) came to power on May 31 last year, following a December 2016 election, ousting the VMRO-DPMNE from power for the first time in a decade. Zoran Zaev immediately signalled he was willing to re-open talks with Greece. His foreign minister, Nikola Dimitrov, visited Athens on June 14. He and Greek Foreign Minister Nikos Kotzias, officially re-opened direct talks to resolve the name issue that day.

Those talks are taking place on the basis of a composite name including the M-word, which the republic would use for all internal and international purposes.
x
Posted by John T Psaropoulos at Thursday, January 25, 2018 No comments:

Greece has almost cleared its latest hurdle on the road to graduating from economic oversight by its creditors, but not quite. Monday's meeting of euro area finance ministers, or Eurogroup, declared a political agreement, but in order to disburse a €6.7bn loan instalment Greece needs to stay abreast of interest payments, it wants to see evidence that certain measures are being implemented, not simply approved in parliament.

First, it wants to see that a new law enabling banks and tax authorities to foreclose on homes and sell them online will produce "a continuous and unimpeded flow of electronic auctions". Until a January 15 bill went through parliament, auctions were carried out in physical courts. Protests by homeowners and sympathisers often disrupted proceedings, and by intimidating notaries-public, put a stop to them for all of last year (see video below).

The tranche of €6.7bn breaks down as follows:
- €3.3bn cover Greece's debt servicing needs to the end of June.
- €1.9bn are to go towards a rainy day fund, which Greece needs to have in place in order to graduate from its fiscal adjustment programme in August.
- €0.5bn will go towards payment of half the government's debts to its suppliers, a cash injection to the Greek economy.
- €1bn will be paid out at the end of April, once the government has paid off its outstanding debts to suppliers.

The Eurogroup also wants to see progress on privatisation. The highest profile selloff in 2018 is that of the Public Power Corporation, plagued by controversy for years.

Greece is meant to graduate from its fiscal oversight by the Eurozone and the International Monetary Fund, its two main creditors, in August, following which it hopes that its massive outstanding debt of €332bn will be rescheduled. The IMF says that without further rescheduling, Greece won't be able to repay its debts after 2020.

The Eurogroup's incoming chairman, Portugal's former finance minister Mario Centeno, offered promises to this effect: "We will look into a mechanism that will link debt relief to growth developments," he said, but warned that, "a sizeable primary surplus and reform momentum must stay on and outlive the programme in order to unlock growth potential and regain investors' confidence."

Greek finance minister Euclid Tsakalotos said he was satisfied with the outcome. "It was a point of great encouragement for us that the final paragraph of the communique mentions a working group, which will specify the debt measures in terms of what we call the French Mechanism."

By "French Mechanism", Tsakalotos was referring to a mechanism demanded by Syriza since it took power in January 2015, whereby Greece would repay its debt in proportion to its GDP growth. "There will be a certain amount of debt relief," he explained, "and following that, if growth is disappointing, there could be some further relief."

Tsakalotos ruled out a line of credit for Greece after it graduates from fiscal oversight, saying this will probably be replaced by its new rainy day fund.

He also said that in order to graduate, Greece will have to come up with its own plan for growth and development of the economy. This, he said, has already begun in the omnibus bill passed on January 15. That bill re-establishes the national land register, begun to little effect in the previous decade, delineating forest and coastal land from land that may be commercially developed. This delineation has been a long-standing demand of the business community, since many domestic and foreign investments - especially in tourism - have stalled on the inability to secure planning permission.
Posted by John T Psaropoulos at Monday, January 22, 2018 No comments:


"If we had not begun by taking risks and [displaying] courage and using all our strength, this programme would not have run as it did."
Posted by John T Psaropoulos at Wednesday, January 10, 2018 No comments: