How credible is Erdogan on refugees?


On May 25, just a day after the World Humanitarian Summit had concluded in Istanbul, Turkish President Recep Tayyip Erdogan warned the EU that unless it implemented a visa waiver for Turkish nationals without imposing conditions, his country would not enforce a readmission agreement for refugees.

"If you're still imposing criteria on Turkey which provides important support to the European Union by preventing those living in camps and pre-fabricated homes who are waiting to go to Europe (from getting there), then I'm sorry," the Associated Press quoted him as saying.

The implied threat is broader than readmission. If Turkey should abandon a “statement” made on March 20 with the European Union, it is presumed that refugee and migrant flows from Turkey to the Greek islands might shoot up to thousands a day, as they had done at the end of last year.

For the past few weeks those flows are down to dozens a day. The Hellenic Coast Guard rescued 126 between Friday morning and Monday morning. That reduction is attributed to the Turkish enforcement of the March 20 deal, which stipulates that it will prevent refugees from crossing in the first place, as well as readmit them.

Does that mean that Turkey can credibly imply a threat to inundate Europe with refugees again, should the March 20 statement fall apart? European Migration Commissioner Dimitris Avramopoulos certainly seems to think so.

“This agreement has to be enforced,” he told Greek president Prokopis Pavlopoulos on May 30, “because we [Greeks] will be the first to suffer the consequences if it isn’t… In Turkey right now there are three million refugees and on the north shores of Africa 500,000 who are awaiting the moment when they can cross the sea at the hands of ruthless smugglers. Italy and Greece are under enormous pressure.”

There are data to counter this view, however.

A graph of refugee flows across the Aegean compiled by the Financial Times Brussels Blog (below) based on UNHCR tallies, casts doubt on whether Turkey’s goodwill is the exact cause of that reduction in flows. 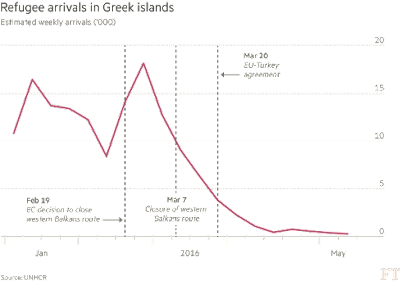 It shows that flows peaked in November 2015, and were already sharply reduced when the March 20 statement was made. It also shows that none of the milestone events since last autumn – including the closure of the Western Balkans route – had a definitive impact on flows on its own. The reduction seems to be sustained and organic. What, then, is its cause?

Undoubtedly Turkey’s stricter patrolling of its borders with the help of a NATO task force is a factor in the reduction of flows, but there are others. Europe’s unwillingness to take in more refugees, the closure of the Western Balkans route, the fact that refugees had to wait for weeks and months to be processed and the deportations of many back to where they had started their journeys are almost certainly all factors. The graph suggests that Turkey’s role as guardian has been only a partial explanation at best.

What of the standing population of three million-odd refugees and migrants in Turkey, many of whom have been there for years? Could they not be unleashed upon Europe?

Past evidence suggests that they form a minority of migrant flows. Between April and September last year, the UNHCR polled 1,245 Syrians arriving in Greece. It found that nearly two thirds  - 63 percent – had left Syria in 2015.

While the UNHCR stresses that this sampling is not necessarily representative of all Syrian refugees crossing into Greece, it chimes with anecdotal evidence that last year’s surge of migrants from Syria was largely made up of newly departed refugees.

The fact that the number of refugees staying in Turkey has remained constant and even grown suggests that most of the three million lack the funds to pay smugglers, or have found some form of gainful employment in Turkey’s black labour market, and will stay as close to Syria as possible awaiting the war’s end.

A final factor to consider is Erdogan’s political self-interest. The European Commission has offered Turks visa-free travel on condition that Turkey revise its anti-terrorism laws to exclude journalists and political enemies. Erdogan’s refusal to accept these terms may be in earnest, but it still carries political cost.

The real reason to heed Erdogan is that regional instability for political and environmental reasons is likely to continue in North Africa and the Middle East, and migratory pressure on Europe is likely to be long-term. The EU needs to establish an immigration policy to counter this, which is enforced in its consulates across the region. Paying Erdogan to be Europe’s bouncer will not be a substitute to that.
Posted by John T Psaropoulos at Monday, May 30, 2016 No comments:

This article was published by The Daily Beast. 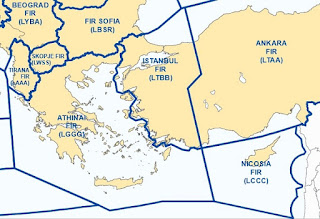 Greek and Egyptian authorities have confirmed that their recovery crews have found debris from the missing Egyptair A320.

“Regarding the outcome of the search, we have been briefed by the Egyptian Joint Rescue Coordination Centre about the discovery of a body part, two seats and luggage at the scene of the search,” said Greek defence minister Panos Kammenos on Friday.

“That was a little to the south and east of where contact with the plane was lost, and further north of yesterday's sighting which was confirmed to not be debris from the plane."

Objects Greek and Egyptian search and rescue crews had found a day earlier turned out to be flotsam. “We have seen orange objects with ropes attached to them and blue objects. We won’t know what they are until they are salvaged,” Ioannis Tsitoumis, Hellenic Air Force spokesman, told The Daily Beast at the time.

Friday’s debris was found 200 nautical miles SSE of the southern Greek island of Karpathos. Prevailing northern winds of 20-50kmh have carried debris from MS804 that far during the overnight, authorities said.

Greece was deploying a C130 transport plane and a surveillance aircraft as well as a frigate for a second day on Friday. Eye witnesses said two C130 planes were taking off from a military airstrip at Kastelli, in eastern Crete, patrolling the skies in alternating, five-hour shifts.

The only other hard evidence of the missing plane’s fate comes from Greece’s Air Force radar, which caught Flight MS804 spinning out of control while plummeting to earth in the early hours on Thursday.

“The picture we have of this accident, which comes from the Air Force’s operations centre, is that at 3:37am the plane… performed a 90 degree turn to the left followed by a turn of 360 degrees to the right, while at the same time falling from 37,000 feet to 15,000 feet, at which point we lost the picture we had, at about 10,000 feet,” said Kammenos

An Air Force spokesman said the drop took place in under one minute, suggesting that the plane was in free-fall and pilots had lost all control. Military radar captured the spiral because it operates at lower altitudes than civil radar systems.

Egypt Air says 56 passengers were on board the Airbus A320, including a child and two infants. Thirty of the passengers were Egyptian, 15 French, and 11 from ten other nationalities. There were also seven crew members and three security staff. The Egyptian Aviation Minister said there was a higher likelihood of sabotage than malfunction.

Flight MS804 reported no irregularities when it entered the Athens Flight Information Region at 2:24am local time on Thursday, Greek civil aviation authorities said in a statement. FIR is an area broader than territorial airspace in which a given air traffic control tower is responsible for monitoring civilian aircraft. Pilots are obliged to signal their entry and departure between each FIR.

Athens air traffic controllers realised something was wrong when they attempted to contact flight MS804 to inform the pilot that he was leaving Athens FIR at 3:27am. They hailed the aircraft repeatedly on regular and emergency frequencies, without luck.

“At 3:29 and 40 seconds the plane’s radar signal is lost,” says the statement from the Hellenic Civil Aviation Authority. “The assistance of military radar was immediately requested in order to relocate the target, but without result.”

The Greek C130 plane was the first responder, taking from Elefsina, west of Athens, at 4:14am and arriving at the last point of radar contact with MS804 shortly after 5am.

That leaves a 90-minute lag during which military and civilian authorities had no eyes on the region. Prevailing winds of about 50kmh could have scattered any debris from the crash in that time. Kammenos said he had requested any satellite imagery that might be available for the area in that time period from other European Union members.
Posted by John T Psaropoulos at Friday, May 20, 2016 No comments: