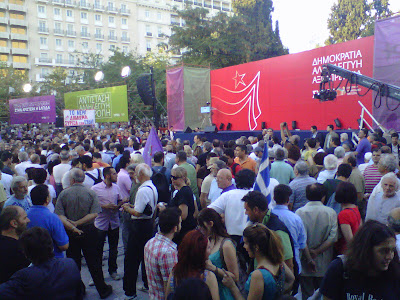 A Syriza rally gathers steam on Syntagma Square on Monday night. This was the first major political event not to be covered by Greek national television in decades, so Syriza installed an eight-camera crew and created its own production, which ERT streamed live. The event, complete with live music, camera cranes and slogans like "we are stopping the catastrophe, we are rebuilding Greece," had the feel of an election rally.

Several political and legal trains were in motion in Athens on Monday night following the closure of the public broadcaster, ERT, last Tuesday, and all of their tracks will cross in the next 24 hours. A few collisions seem inevitable.

Antonis Samaras, Greece's autocratic prime minister, was meeting his junior coalition partners beginning at 7:30pm, just as the leading opposition party, the radical left wing Syriza, held a rally on Syntagma Square in front of parliament. Samaras' job is to hold his coalition together after his partners disagreed with his closure of public television and have expressed broader concerns with his style of management. Syriza leader Alexis Tsipras' job is to give the impression that the coalition's days are numbered and the next election race has already begun.

Several legal battles are also taking their course. The Council of State, the country's highest administrative court, will rule on Monday or Tuesday about whether Samaras' closure of ERT is legal. That would offer a legal answer to a political problem, one way or the other. In lower courts, a slew of media barons is engaged in a battle with unions over a series of rolling 24-hour strikes they declared last Wednesday, which are eating into revenues. Some newspapers and broadcasters have observed the strike, while others have not.

The most serious of these developments by far is the meeting of the three coalition members. Upon its outcome rests the question of whether the government will continue to exist, or fall apart. The anger of the junior partners, who are centre-left, should not be underestimated. Socialist leader Evangelos Venizelos, speaking of conservative premier Samaras and his party, told Sunday newspaper Real, "New Democracy's plan [for ERT] was known to all the media... We knew Mr. Samaras' intention. He knew we completely disagreed. What would happen in any other European country with a coalition government? Would one partner proceed without a parliamentary majority?"

Venizelos and Fotis Kouvelis, leader of the Democratic Left, the third and smallest of the coalition members, have complained in the past about Samaras' autocratic style of leadership. Tonight's meeting is likely to be about the broader rubric of their collaboration, not simply a patching up of differences over the handling of ERT. Venizelos and Kouvelis have not accepted Samaras' concession over the weekend to re-establish ERT's television signal with a small force of reporters, pending its broader restructuring. Hence the danger of an inconclusive meeting tonight, which would prolong the hiatus in the government's reform efforts. Rather than being a pilot for future overhauls of overmanned public bodies, ERT could represent a stalling of them.