Greeks fight recession with growth in the field

An abbreviated version of this article was published by Al Jazeera. 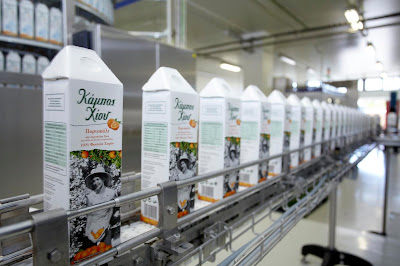 Greek unemployment, now the worst in Europe, was posted at 26.8 percent for March. The jobless have been steadily increasing since May 2008, when the recession began. The situation is so bad, that two years ago the unemployed and inactive population together exceeded the number of people in work, which means that roughly one third of Greeks is supporting the other two thirds.

In the midst of what may be the worst peacetime collapse of a developed economy, many Greeks have decided to go back to the land. The government has strongly supported this. Greece generated a mere 3.6 percent of its economy from the primary sector last year.

Last February, Prime Minister Antonis Samaras launched a drive to reform and expand agriculture, announcing a 350 million euro fund to encourage agricultural entrepreneurship. “There can be no economic growth without emphasis on the primary sector,” Samaras told parliament. His government has been setting up clusters of farmers in greenhouse and livestock farming, and wants to do the same for fish farming, already a growth industry.

The idea of returning to the land has legs. Some city folk didn’t wait for state support to go back to their country roots. For Damianos Zanaras it was a chance to return to his native Chios after a lifetime in shipping. He spent tens of millions of euros building a juice plant, financing the venture with his own savings as well as loans. ‘Kambos Chiou’ would in theory build its success by making a Greek export of the distinctively flavoured local tangerine as a juice, improving the lot of farmers in the process.

The reality has proven disappointing, because Zanaras overestimated local enthusiasm. “We’re still breaking a sweat to make ends meet. Times are hard and farmers don’t help,” he says. He blames the European Union’s Common Agricultural Policy for “spoiling” them over the last forty years. “Now that subsidies have stopped and people have to work hard, they won’t. They let their fruit drop and don’t bring it to the plant.”

Instead, Chians have sought their fortunes in tourism, or away from the island. “There are no full time farmers in Chios any more,” says the plant’s commercial director, Yannis Trantalis. “We tried contract farming but it didn’t work. Most farmers didn’t want to commit. When people aren’t full time farmers they aren’t sure they can meet the production they’ve promised.”

The trouble is not just that Kambos cannot replace the European Union’s once- generous subsidy system.  It is also that Kambos is effectively having to replace the local farmers’ co-operative, which is defunct. Greek co-operatives were set up beginning in the 1960s to guarantee a minimum purchase price for produce, find markets for it and give farmers a collective ability to set market rates. Much of the difficulty in reviving Greek farming stems from the fact that in the 1980s those co-operatives were hijacked as a political infrastructure and never fulfilled their mission.

European subsidies were a separate boon that coincided with the socialists’ rise to power in 1981. They roughly doubled what farmers made by selling their product. The combination of subsidies and party money created an environment in which co-operatives easily lost sight of their mission, and it led to uncompetitive farming practices.

“Instead of using this money as a tool to invest and increase efficiency of agriculture, [farmers] used it as an income resource,” says agriculture minister Athanasios Tsaftaris. “They abandoned traditional products, shifted to monocultures, invested heavily in annual crops where the cost is very high; they exhausted a number of resources like water, fertilisers, energy. This increases costs dramatically, so this makes our agricultural products expensive, less competitive.”

The evidence of what Tsaftaris describes is strongest on the Thessaly plain, Greece’s largest expanse of arable land. For decades it has pumped groundwater to increase yields in cash crops like cotton and maize. It now faces an environmental disaster, as water tables have receded by hundreds of metres.

Unsurprisingly, Tsaftaris wants to help new farmers bypass the co-operative and subsidy system, and some of the most successful ones have done just that. Even on Chios, where tangerine groves are largely neglected, Vangelis Xydas and his brother have spun the successful Citrus brand out of their father’s tangerine grove. “We stopped seeing citrus products as fruit and started seeing them as a raw material,” he says. Citrus sells tangerine-flavoured preserves, desserts, pastas and baked goods through a small but growing chain of fully owned retail outlets.

“Every day we fight to break out into exports,” says Xydas. “We’ve looked at going into the German market with Cocomat, which will decorate its Berlin showroom with our products.”

Like Zanaras, Xydas would like to be something of a prophet in his own land, channelling other farmers’ produce into his branded, manufactured goods. And like Zanaras, he’s been bitterly disappointed. “No one wants to know more about what I have done and how. No one asked me to show him how it’s done,” he says, with a note of disbelief still in his voice. “People do see our example, and they see it as distant from them. They say we plugged ourselves into the right programme. It’s as though I don’t belong to this society.  I feel aloof.”

He is not the only one. Vasilis and Roula Balas perhaps suffered from rose-tinted vision when they quit their high-powered Athens jobs in IT and marketing to start a farm on their native Chios. “We wanted our family to grow up the way we had grown up, closer to nature,” says Balas.

The original plan was to make a living from cultivating mastic, the aromatic sap of a tree that thrives nowhere else in the world and is used as flavouring or as stomach-settling medicine. When the Balases’ twins were born last year, they realised that they had to create added value by doubling up their farm as a tourist attraction, but ran up against local inflexibility.

“When I approached the tour operators’ association suggesting that I, a farmer, operate tours, there was uproar. ‘What business’, they said, ‘does a farmer have being a tour operator?’” Although Balas convinced them to bring busloads of tourists to his farm, he came across a new problem. “I can’t sell them any mastic because the co-operative obliges me to sell my production to it. I’d have to buy back my own mastic from the coop at a premium.”

Xydas believes that the countryside’s quality of life advantages can ultimately make up for some loss of income. “You have a simpler way of life and lower costs. Both growth and recession are more apparent in the city than in the country. We did not experience the benefits of growth before, and we do not feel the depression now.”

The fact remains, however, that innovators like Zanaras, Xydas and Balas are few. If the government is going to shift appreciable numbers of people into primary industry to help rebuild a broken economy, it will have to plan viable futures for them.

“There are basic pre-conditions – sun, land, sea, the experience of Greek growers – these are the comparative strengths of the Greeks,” says Agrenda’s Panagos. He envisions a future in which Greek products ride on an already healthy tourism industry to reach export markets without even leaving the country: “If we combine our culture and agriculture we will have a truly unbeatable cocktail.”

See two related television stories on Al Jazeera. The first is about innovative farmers. The second is about the environmental disaster on the plain of Thessaly.