This article was published by EnetEnglish. 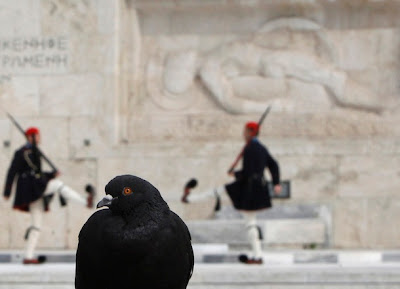 Greek presidential guards march at the Tomb of the Unknown Soldier in front of the parliament in Athens. A pending revision of Greece's citizenship law is likely to reopen the debate over what criteria to use to judge immigrants' suitability to become citizens. (John Kolesidis, Reuters)


True to its election promise, the conservative-led government is preparing a new citizenship law. It is a politically significant moment. This is the first major bill to be considered by a Greek government in almost three years that does not stem directly from the country’s loan obligations to its creditors. It is, in a sense, the first political sounding of Greece in years.

It is also the first test of coalition unity on an issue that deeply divided parties during the May and June 2012 elections. The socialists stood behind their 2010 immigration law, which for the first time provided for citizenship on the basis of Greek residence rather than descent.

Conservatives vowed to repeal the socialist law because it retroactively legalises the children of people who entered the country without permission. Prime Minister Antonis Samaras called this a “magnet for illegals”.

Overhauling the socialists’ law while cohabiting with them might under normal circumstances be difficult for Samaras. But on February 11 the country’s highest administrative court gave him a legal pretext. The Council of State declared provisions of the existing law unconstitutional.

The current law allows parents citizenship on the basis of five years’ provable legal residence (childless adults have to wait for seven). Five years of legal residence “do not ensure a person’s substantive induction into Greek society,” the court opines, especially considering that many of the applicants may have entered the country illegally in the first place, and gained legal status through amnesties. The revised law, a draft of which EnetEnglish has seen, suggests raising this period to its previous length of seven or eight years.

The law also grants citizenship to minors and young adults (18-21) after attending Greek school for six years.  This, the court rules, is also unable to “guarantee the desired induction, given that the law doesn’t also demand a substantial relationship of the parents with the country.” It follows easily enough that the same criterion is doubly inadequate for a young adult of 18-21, “who may have, after graduating, left the country.” One version of the revision would require nine years of Greek schooling. Another would demand a Middle School diploma, so as to ensure that the six years are formative.

The Council of State goes further. It objects to non-Greeks’ right to vote in local elections on the basis that “The Constitution does not recognize different ‘peoples’ each with a different composition. There is one People, made up of all Greek citizens and them alone…  and this people is the bearer of sovereignty, the legalising factor in the exercise of public office, whether that is in reference to the State or local governments created by the State.” The revision would accordingly revoke EU nationals’ right to vote in local elections.

The revision raises a number of questions. First, the law is deemed unconstitutional “because it uses a superficial criterion of citizenship.” But the court fails to explain why seven years are enough to ensure substantive induction and therefore constitutionality, where five are not. Induction is never even loosely defined. No assimilation studies or figures are cited.

Second, using Greek school as a criterion for “induction” into society is likely to inflict far more damage on the citizenship prospects of the children of diaspora Greeks than on the children of other ethnicities.

That is because Greeks now comprise the majority of the enrolment of international schools in Greece, and many of these are not Greek nationals but the children of repatriated diaspora Greeks. They see these schools as a refuge from an often outdated Greek curriculum and as a springboard for tertiary education abroad.

In an economy with unemployment rates of close to 60 percent among the young, many Greeks are applying to overseas universities and opting for non-Greek curricula (mainly US, British, French, German and Italian). They would be penalized. If the revised law were aiming to hurt the citizenship prospects of the children of economic migrants of non-Greek backgrounds, on the other hand, who as a rule make use of Greek public education, it would fail.

Perhaps most controversially, the new law would force those applying for citizenship in future to give up existing passports.

Article 4 of the constitution does allow the revocation of Greek citizenship “if someone willingly acquires another nationality, or undertakes duties in a foreign country inimical to the national interest.” The spirit of the provision is clear. The constitution was being penned during the year in which the communist party was legalised. As a counterweight, it offered a deterrent and punitive power reserved for those who might have defected across the thousand kilometre-long Iron Curtain that then comprised Greece’s northern border (thousands had done so in 1949, at the end of the Greek Civil War). Coming just five months after Turkey’s invasion of Cyprus and the fall of the dictatorship in Athens, it was perhaps also guarding against the possibility of disloyalty among a disgruntled military officer class.

But the current revision seems to take a legal pole vault from the constitution’s intended import. Communism has fallen, and thousands of Greeks have returned from former Soviet states to claim a Greek passport. So have thousands of diaspora Greeks from the West, because we now live in an environment of free movement and settlement of people between 27 countries; and here, mixed marriages and their offspring are increasingly frequent. There is an argument to be made that any sort of single nationality clause in the constitutions of EU members is anachronistic, at least with respect to other member states. Even Germany, which has strict attitudes towards dual citizenship, has decided to allow it for EU nationals. But for Greece, a country with a large diaspora and hopes of attracting investment, a ban on dual citizenship seems beyond the bounds of reason.

The revision of citizenship law comes at a time when Greeks are no longer willing to tolerate large numbers of undocumented migrants crossing onto Aegean islands from Turkey in rubber dinghies, and then trying to smuggle themselves into the rest of the EU. More than 80 percent of Greeks last year supported Samaras’ election promise to sweep them off the streets and into detention camps, ultimately to deport them. According to the UN High Commission for Refugees, Greece is now the preferred crossing point for 90 percent of illegal migration into the EU. This is related to the issue of citizenship, because three rounds of legalization (1995, 2001 and 2005) allowed people who entered the country illegally but found jobs here to become legal. As of 2010, they could also apply to become citizens.

That bothers many Greeks, who may be able to stomach the idea of economic migrants from the former Soviet Union and central Asia as metics, but not as part of the core of a traditionally homogenous society. The economic crisis has now galvanized this reaction to years of lax border protection and internal controls. That may be understandable, but what is truly troubling is that this popular indignation translates as a xenophobic, even authoritarian streak in government circles. Last week, 85 conservative members of parliament petitioned the prime minister to reserve jobs in the military and police for Greek nationals whon are also ethnic Greeks, on national security grounds. They cite the current citizenship law as a security threat. But such an amendment would fly in the face of constitutional equality before the law.

Even more worryingly, some senior officials in government are intimating that such flagrant violations of principle may no longer matter to them.

Last December the cabinet secretary, Panayotis Baltakos, told the National Committee for Human Rights that “he doesn’t care, in his capacity as a representative of the government and New Democracy, about the committee’s work and human rights, nor about the country’s international obligations.” The complaint comes from an open letter to Samaras from the committee’s president, posted last week. In any Western democracy worthy of the name, Baltakos would have been forced to resign.

Greeks are right to feel besieged by a nefarious human trafficking industry that brings as many as 100,000 undocumented migrants to their shores each year. But trampling on constitutional or universal human rights in order to impose a more tribalist citizenship law will not ultimately benefit them. The behaviour of Baltakos and New Democracy’s 85 MPs suggests that the current revision of citizenship law is underwritten not by a concern for principle, but a dangerous disregard of it.
Posted by John T Psaropoulos at Monday, March 04, 2013