Cyprus: The crisis so far 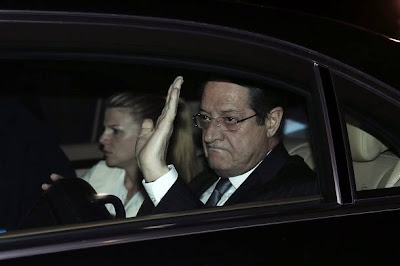 Cyprus will wind up Laiki Bank, the country’s second-largest, and transfer its insured deposits of 100,000 euros or less to the Bank of Cyprus, the Eurogroup agreed with Cypriot president Nikos Anastasiades on Monday morning.

That would in theory render the Bank of Cyprus viable, while deposits of more than 100,000 euros at Laiki would be used to cover the costs of covering the bank’s liabilities and winding it up. Estimates of how much of their money large depositors will lose range between 20-30 percent.

Anastasiades addressed the nation on Monday night to explain that , though painful, the deal was the best possible under the circumstances.

The sacrifice of Laiki was thought necessary after the government of Cyprus failed to find funds to bail out the country’s two biggest banks last week, and the European Central Bank announced that it would cut off liquidity to them after today. The banks would have defaulted on their obligations within hours of opening.

The government had proposed funding the bank bailout through a one-off levy of 6.75 percent of deposits under 100,000 euros and 9.9 percent of deposits above that figure. But that plan, agreed to by the Eurogroup after an all night session on March 16, was scuppered by the Cypriot parliament three days later. Lawmakers pointed out that there was no guarantee that similar levies would not follow, or spread to other European banking systems.

The leading opposition party, the communist AKEL, in particular, said that Cyprus would emerge with a plan of its own that would centre on selling bonds on future revenues from recently discovered offshore gas and oil fields. AKEL president, Andros Kyprianou, also said he would help Anastasiades find money through overseas loans. Russian businesses hold some 18-20bn euros in offshore accounts in Cyprus, and it was thought that Vladimir Putin might step in with public money to protect private Russian investments.

In the euphoria of the moment, even Greek coalition leaders expressed support for the no vote in Nicosia, despite the fact that they have staked their political careers on accepting a harsh bailout from Brussels. Perhaps they felt that Cyprus would now avoid the fate of Greece. Cypriot Finance Minister Michalis Sarris was despatched on Tuesday to Moscow to negotiate a loan. By Friday, Russia declared that the only concession it was willing to make was to renegotiate the terms of its existing 2.5bn euro loan to Cyprus. By then, European leaders were also expressing skepticism over whether Cypriot energy resources could be evaluated accurately enough in time for a bond issue. Thus, Cyprus’ two most speculative funding options were closed. To formulate a plan B, Anastasiades was forced to return to the basic tenet of plan A – taking money from Cypriot and overseas account holders. The crucial refinement of plan B is that ordinary Cypriots with accounts of 100,000 euros or less won’t be affected.

The Cypriot business community now worries about two dangers. The immediate one is that much of the estimated 68 billion euros in Cypriot banks may fly the country. The longer-term danger is that Cyprus may lose much of its economy, an estimated 80 percent of which depends upon business services.

Nine bills voted into law over the past weekend aim to curtail both those dangers. One of the nine gives the central banker and finance minister extraordinary powers to impose temporary capital controls, so that when banks do reopen the flight of money is limited.

Those powers include limits to cash withdrawals or the use of credit cards, debit cards and cheques. They allow the freezing of accounts, prevent the opening of new accounts, and halt transfers and transactions within a bank or between banks. Anastasiades said they would be imposed for the shortest period possible.

Another key piece of legislation laid down the powers that will now allow the central banker to resolve Laiki Bank. The Law on the Resolution of Financial Institutions gives the Cypriot central banker sweeping discretionary powers to resolve any financial institution on evidence of unviability or lack of solvency or mismanagement.

It is based on an ECB directive other eurozone members have harmonised and which, bankers say, has been under preparation in draft form long before the February election. It also hands the central bank complete discretionary power to transfer or sell an institution's assets, manage the institution and be legal guardian of it for up to five years.

The central bank's two basic priorities are a) to ensure that the public interest is served and b) the institution is worth more through the restructuring than through outright breakup and sale. In other words, the institution's business activities should preferably be preserved.

A third law passed last Friday will allow the president to create a so-called Solidarity Fund to help keep the island afloat, as it were. The fund was expected to raise billions by issuing bonds on the deposits of public pension and health maintenance funds; public real estate holdings; the property of the church, donated by Archbishop Chrysostomos; and those oil and gas deposits. While many of these assets have now been questioned as a sound basis for a bond issue, the fund may yet become a reality - though it is no longer expected to raise the 5.8 billion euros the Eurogroup originally required for Cyprus to qualify for an additional 10 billion euros in low-interest bailout money.

The crisis of the past week has left Cyprus reeling, and furious. Not only bankers, but the business community too fear a collapse of the economy. The statement earlier on Monday by French Finance Minister Michel Barnier, that “Cyprus’ economic model is finished”, strikes to the heart of their concerns. Sarris’ extension of the closure of all Cypriot banks until Thursday underlines those concerns. Cyprus is still not ready to face the first day of the rest of its economic life. Until it does, and until the full effect of the eurozone’s medicine becomes apparent, the wisdom of the prescription remains in doubt.