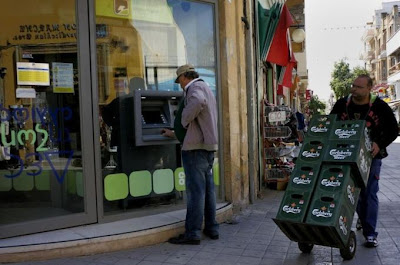 A Cypriot man tries the ATM on Thursday (Galo/Getty)

Cypriots streamed into banks on Thursday morning for the first time in two weeks, to find out whether their deposits had been reduced and to transact long overdue business. Many came away with their business incomplete and their questions unanswered.

“I came to pay 37,000 euros’ worth of invoices,” said Angelos outside Laiki Bank on Ethnarhou Makariou, a busy commercial high street in downtown Nicosia. The 77 year old, who declined a surname, was running an errand for his children, now inheritors of a frozen food importer he set up. “We normally have two months’ worth of credit from our German suppliers. At the moment we don’t know if we will continue to enjoy that, so we’re just paying up and hoping for the best.”

But strict controls on movement of capital put in place by the finance ministry on Thursday mean that Angelos cannot remit overseas any amount above 5000 euros without special permission from the Cypriot central bank. All he was able to do was to leave money orders with Laiki Bank. and hope for an answer the following day.

Neoklis, 31 and his brother Konstantinos, 37, have an even more serious problem. They have 350,000 euros in deposits with the troubled bank, 250,000 of which is not covered by a Europe-wide banker’s guarantee. That makes it liable to a levy that all uninsured deposits will be subject to at Laiki and the Bank of Cyprus, the country’s two biggest lenders.

The two banks, crippled by toxic Greek bonds last year, have been cut off from markets. They have survived solely thanks to an emergency cashflow from the European Central Bank. “We’ve tried to move our money out of Laiki two months ago, but the bank wouldn’t let us,” says Konstantinos. “The excuse the bank gave is that Laiki is now state owned and the situation has been normalised.”

The situation was far from normal. The government had been in talks with its Eurozone partners since last year for a bailout loan for both the indebted government and the banking system. On March 16, the Eurozone told Cyprus that while it would extend the government a 10 billion euro loan to help shore up publicly guaranteed pension funds and balance its budget, the banks would have to rescue themselves. Lacking any ability to borrow, the banks’ only choice was to pick their customers’ pockets or go bust. How much they will pick from accounts above 100,000 euros remains to be announced.

“We’ve lost our trust in the Cypriot banking system, we’ve lost our faith in our politicians,” says Konstantinos. “We will figure out how to manage our wealth in the best possible way for our children,” rejoins Neoklis, adding that moving some money overseas is not out of the question.

They do have one hope of avoiding a levy. Bankers have told Al Jazeera that they will only penalise depositors once all their liabilities have been offset against their assets. The brothers have taken out a 300,000 euro loan that puts their net worth below the levy threshold. “We came to find out whether our deposits and our loans will cancel each other out,” said Konstantinos. The bank couldn’t tell them, perhaps because it hasn’t finished crunching the numbers for more than 300,000 clients. “No one could tell us when we’ll know,” Konstantinos said.

Cyprus is reeling from the experience of the last two weeks. This island nation has become prosperous as an offshore business centre, offering corporate legal, consultancy and banking services. That has given local businesses a boon of easy credit and a low corporate tax of 10 percent. Capital controls, the eurozone’s first, and in theory a temporary regime, come as an enormous shock.

Overnight, Cyprus has forbidden money transfers abroad except to pay for imports or student tuition. Cypriot credit cards will have a limit of just under 5000 euros overseas, and outbound travellers have been told to take no more than 1000 euros in cash. Individuals and companies based in Cyprus will be obliged to repatriate their earnings from overseas activities within two weeks of transactions. The government views these controls as temporary but necessary to prevent a massive capital flight, which could cripple the banking industry anew.

The longer term effect on the economy is an even greater concern, however. It is gradually dawning on Cypriots that their island paradise is about to collide rudely with a very different reality. “I believe that we are going to see chicken coops in Nicosia,” says a prominent lawyer on condition of anonymity. “We are all going to start growing our own food.”

His concerns are based on the fact that the service sector comprises some 80 percent of the economy. At the heart of it lies banking. “Confidence in the Cyprus economy has been shaken, particularly in the circles of foreign investors that have put their monies here, and on which investments the Cyprus economy was flourishing until now,” he says. “[It] is a great damage which cannot be overcome in the next couple of decades, maybe.”


The lawyer admits that “nobody else is primarily to blame except ourselves,” but adds, “I would expect more solidarity towards a small country like ours, representing 0.2 percent of the GDP of the eurozone.”

Even Finance Minister Mihalis Sarris, who has been a staunch defender of the compromise reached with the Eurozone, has let his frustration slip. “We could have borrowed 12 billion, but for various reasons our partners wanted to restrict our borrowing,” he said at a press conference on Tuesday.

He was bolder in a televised interview the following day. “When it came to banks… our partners wanted to see blood on the table.” The implication is clear. Eurozone finance ministers, who believe Cypriot banks disproportionately large, used the crisis to cut it down to size. Their May 16 communique says, “The current fragile situation of the Cypriot financial sector linked to its very large size relative to the country's GDP will be addressed through an appropriate downsizing, with the domestic banking sector reaching the EU average by 2018.”

By then, however, the outlook for the Cypriot economy is grim. The Institute of International Finance, which represents banks and financial institutions, on Wednesday released a report expecting Cyprus to lose much of its services economy: "While it is hard at the current time to be confident about the degree of likely declines in GDP, it seems plausible that the cumulative decline could amount to as much as 20% of GDP in 2013-15." A preliminary study by Belgian bank Societe Generale came to a similar conclusion.

Cypriot frustration is now being expressed in the form of a judicial panel, announced by President Nikos Anastasiades on March 25, to investigate culpability among bankers, politicians or anyone else. There are no guarantees as to whom it might implicate.

The IIF offers an inauspicious outlook. “In the last few days, Cyprus came closest of any country to date to leaving the Euro in a disorderly fashion,” it says. “After a week of messy negotiation and flawed proposals, default and devaluation was avoided only though the imposition of what may well turn out to be very large losses on bank creditors.”

Perhaps Cypriots will only be saved from an internecine blame game by shifting their growth prospects to energy. “We will probably experience a serious downturn in economic activity,” said Sarris on Wednesday. “But we will eventually have a boon in natural gas and energy,” a reference to recently discovered offshore oil and gas fields Cyprus was unable to convince the Eurogroup could be treated as a basis for a bond issue. “Overall my sense is that we will have a more serious impact on economic activity than before this banking crisis.”