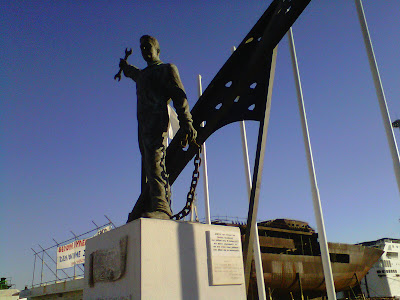 I was in the dejected neighbourhood of Perama last month, producing a long-format report for PBS NewsHour on the high unemployment rate (about 50 percent) stemming from the collapse of the shipbuilding and ship repair industries that once underpinned the economy there. Some smaller, private shipyards continue to offer employment to about half of the number of men they employed before the crisis. But the mammoth shipyard owned by the Peiraieus Port Authority (OLP) - the so called zone - is the worst-affected. There unemployment stands at about 90 percent. We met several metalworkers who had served, or were about to serve, stints in places as far away as Russia and the Congo. These work contracts usually only last a couple of weeks or so, but even a few days of work a year can provide food on the table.

At the cafe that stands in the largely desolate shipyard, unemployed workers gather to grumble and, as on the occasion when PBS was there, openly fight about who is to blame for the crisis. One worker accused another of being the author of his own demise for drinking his salary in the good years, when he was earning as much as 2,000 euros a week. Another blamed the union for pushing day rates and benefits up too high (for metalworkers they still stand at close to 200 euros a day after benefits, although the private shipyards that are still in business have made private agreements that lower those rates considerably).

At the entrance to the zone stands a monument that at first looks like a tribute to socialist realism put up by a union, or perhaps the communist party, whose traditional stomping ground Perama has been over the years. But it is none of the above. This is a private tribute, erected in honour of Vasilis Irakleous, a young man killed on his first day at work in the zone, on 16 July 2007.

The following, Laconic message is set in stone beneath the statue:

"Vasili, On your long journey, my thought and my love will be with you always. Your father, Fylaktis." 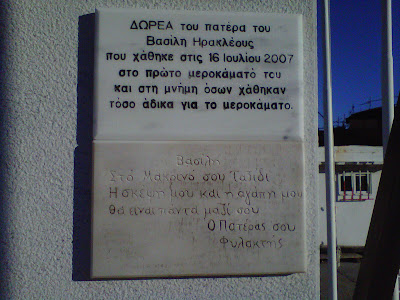