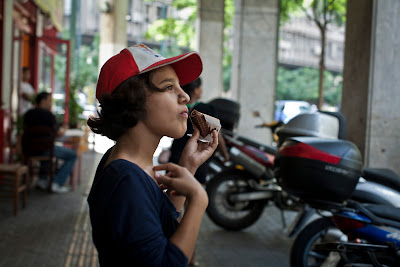 Eleni, 9, is a Bulgarian Roma who has been in Greece for eight years. She roams the streets with her sister Zoi, 12 and brother Mario, 14. Their mother works as a nanny in Spain and their father works late hours as a DJ in Athens, so they are practically left to their own devices. Asked if they attend school, the quick-witted Eleni quips, "We go on Saturdays and Sundays."   (Photo by Anna Psaroudaki)

Greece’s growing chain of detention camps for undocumented migrants came under strong criticism from the United Nations on Monday. Francois Crepeau, Special Rapporteur for the Human Rights of Migrants, said conditions in some of the camps were “shocking” and the detention of children and families “utterly unacceptable”.

The Rapporteur said migrants were often detained without proper heat, hygiene or legal representation. “They are not informed properly about their rights, about what is going to happen to them, about recourses. They don’t see lawyers, or the lawyers take the money and run.”

Recently Greece's police spokesman told Al Jazeera that the detention policy was partly undertaken for migrants’ own good. “In the camps a migrant has a certain level of comfort, regular meals, a lawyer and medical attention,” Christos Manouras said. Journalists are not allowed into camps to verify these claims.

The worst camp he saw was in the town of Vena, Crepeau said, where “28 people are crowded into a room [of about 35 square metres] with beds which are concrete slabs, filthy toilets and nothing to do and no light… No television, nothing to read, no information – these are not places where I would care to spend more than an hour.”

The Special Rapporteur delivered the remarks in Athens, at the end of a nine-day inspection that included meetings with government authorities. The inspection is part of a year-long study of external EU borders that has also taken him to Brussels, Italy, Tunisia and Turkey.

Greece adopted a detain-and-deport policy for undocumented migrants in March, three months before the conservative-led government came to power. Under the conservatives the policy has been intensified. Police stop migrants on the street to check their residence papers every day, and regular police sweep operations have rounded up migrants en masse.

“The Greek-Turkish border is the main entry point of irregular migration in the European Union. Estimations say that 85-90 percent of irregular migrations go through that point,” Crepeau said. Prime Minister Antonis Samaras has called the influx “an unarmed invasion”. Greece has made over 100,000 arrests of undocumented migrants a year between 2006 and 2011. Despite a negative birth rate, its population has grown by over a million people over the past two decades.

Until this year authorities gave undocumented migrants three months to leave the country of their own accord. But after five years of recession and a 25 percent unemployment rate, political pressure built up in favour of a more aggressive policy. At the beginning of the year over eighty percent of Greeks were polled as favouring detention or deportation for undocumented migrants. This year for the first time the far-right Golden Dawn party was elected to parliament, claiming seven percent of the vote largely on the basis of its anti-immigrant policy. Polls show it could claim twice that vote if elections happened today.

Despite the political pressure, Crepeau believes the Greek policy is ultimately untenable. “The policy is not viable either legally or practically,” he told Al Jazeera. “Legally you can only detain if the person is dangerous to herself or others, or if the person is at risk of not coming back for proceedings. These are the only two reasons for administrative detention. If you only have a policy of detaining everyone at all times it’s against international law and it’s against international human rights. It’s not legally viable.”

If anything, however, Greek policy seems to be moving in a more xenophobic direction. Legal amendments ratified this year criminalise illegal entry onto Greek soil, and make it possible for the government to detain undocumented migrants for up to 18 months. Last month, Samaras said it was one of his government’s top priorities to abolish a two year-old citizenship law that offers Greek nationality to the children of migrants who have been legally resident in Greece for at least five years. His interior minister recently said that he would introduce tougher requirements, such as compulsory attendance of the Greek national curriculum in school.

Greece’s radical left wing Syriza, the main opposition party in parliament, has called for full migrant access to health and education, and for turning detention camps into open reception centres.

Although he called for an end to “a policy of systematic detention of  all migrants,” Crepeau did not lay the blame on Greece’s door alone. He said the European Union had to collectively resolve the problem of undocumented migration, because EU member states have unrecognised labour market needs which attract migrants.”
Posted by John T Psaropoulos at Wednesday, December 05, 2012