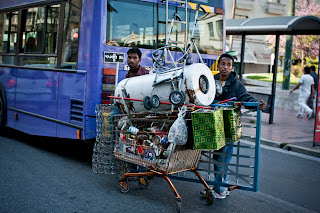 Pakistani migrants in Athens collect scrap metal. The Pakistanis have carved a niche for themselves at the bottom of society, washing windshields, selling pirated CDs or picking fruit. (Photo by Anna Psaroudaki)

Greece is bracing itself for a possible re-establishment of malaria, 37 years after the disease was wiped out across the country.

“We have indigenous infections for the first time in decades,” says pulmonologist Chrysoula Botsi, who has worked with aid organisations to detect the disease. There have been 68 cases of infections taking place within Greece in the past 16 months, and this year they have spread over an increasingly wide area.

Potentially more dangerous is a parallel, though smaller, rise in West Nile Virus cases. The virus first appeared in Greece in 2010 and can, in rare instances, lead to encephalitis and death.

“I cannot tell you what will happen in the spring, when temperatures rise again,” says Agoritsa Baka, a doctor with the Greek Centre for Disease Control and Prevention (HCDCP). But both Botsi and Baka are cautiously optimistic that the disease can be contained.

The HCDCP has placed a network of doctors on alert to locate isolated infections quickly, and armed public hospitals with a rapid malaria test. It provides municipalities with insect surveys of their area. And in collaboration with the Greek chapter of Doctors Without Borders (MSF), it has carried out house-to-house tests in high-risk areas, actively looking for unreported malaria cases.

But one of the most powerful offensive weapons – insecticide spraying - is often missing, as cash-strapped local governments slash spending. This, and unseasonably hot weather, have contributed to an explosion in populations of mosquitoes that carry malaria.

The malaria outbreak began with 57 infections in the Evrotas river valley in Lakonia, southern Greece. “Until July 2011, the spraying was the responsibility of regional government,” says Evrotas mayor Yannis Grypiotis. But the country’s 1035 municipalities were last year telescoped to 325 in a government-shrinking exercise. This year municipalities have seen their state subsidy drop by 30 percent in addition to a previous 60 percent cut. “They piled responsibilities and costs onto the municipalities,” Gryptiotis says.

“When local government loses 60 percent of its funding, then people have to decide what programmes to maintain,” says the HCDCP’s Baka. “This has to be classified as a national programme, not a local one. We ourselves are facing spending cuts and will have difficulty even carrying out next year’s survey.”

Takis Panayotopoulos, who teaches at the National School of Public Health and advises the health ministry on epidemics, agrees. “Servicing our external debt must not take place in a way that deprives Greeks of all services. We cannot stop funding public health. Sometimes the pressure for more cuts from abroad comes one-track-mindedly.”

This year, home grown cases have fallen to a fifth of the 2011 level, but are spread across a greater area. Four separate prefectures are grappling with indigenous infections, several of them in Marathon, just east of the capital, Athens.

“I am not worried about a broader epidemic because there is a drop in cases this year,” says Panayotopoulos. “There is only one true source of repeated infections – Lakonia – and all other cases are isolated.”

“We currently have a small number of municipalities that are affected,” says Botsi. “Marathon, Evrotas have standing water. We know exactly why the mosquitoes are present there.  So it ought to be controllable.”

But Grypiotis pours scorn on government efforts prior to 2011, seeing officials in Athens as little more than subsidy scroungers. “The HCDCP was indifferent to malaria until cases appeared. They weren’t doing anything. They are laughable, ineffective and dangerous.”

Greece fought for decades to wipe out malaria. Hundreds of swamps and lakes were drained beginning in the 1930s. An intensive national spraying campaign after the Second World War lasted for 15 years. Only in 1974 did the country declare itself rid of the sickness.

Aside from mosquito explosions, there is another cause of the infections with social implications. Twenty three of last year’s 57 cases were among a single population of Pakistani farm labourers in Evrotas. “Those people live on top of each other in the dozens. So basic health conditions do not exist,” says Botsi. “When the farmer piles them up in a shack like that what do you expect?”

Marathon and Evrotas are agricultural regions dependent on communities of low-paid Afghans, Pakistanis and Bangladeshis to grow crops affordably. (A decade ago Marathon’s Pakistanis went on strike to have their pay raised to a euro an hour). Hailing from malaria-prone countries, these migrants are often carriers of the disease.

“The vivax virus remains in their liver in a dormant state and can, without warning, create a new bout of infection,” says Baka. “Since they often work during their symptoms and come into contact with mosquitoes, the mosquito is then infected and infects others.”

Among the preventive actions authorities have taken since the outbreak is to screen almost 3,000 people from these ethnic groups.

Evrotas mayor Yannis Grypiotis blames Pakistani immigrant labourers who pick fruit. “The health ministry and others do not want to tell the truth about the disease, which is that immigration policy is the problem. I see no political will to deal with the issue.”

“I don’t like the sight of Pakistanis living wretchedly the way they do in Pakistan,” Grypiotis continues. “I want them to respect the norms of life here, the way my grandfather did when he migrated to the States. And malaria is not the only issue. There are others that they carry, like TB and AIDS.”

Malaria causes fever and exhaustion, but can be lethal to a child or someone with a heart condition. One of those infected this year is a seven year-old girl.

“I don’t think anyone can seriously answer the question of what is the primary reason,” says Panayotopoulos. “The spread is partly a result of the fact that we are a multicultural society and we will never have a complete absence of danger.”
Posted by John T Psaropoulos at Friday, November 02, 2012