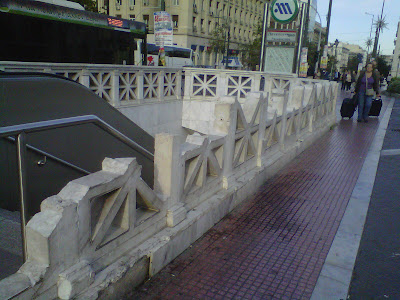 The marble railing of Panepistimio Metro station, smashed for masonry in previous demonstrations.

The stability of the Greek government and the survival of Greece's economy are at stake this week. Strikes and expected protests are surrounding a new round of austerity measures the government is presenting to parliament today, going to a vote late on Wednesday.

Lockdown in rail transport and taxis is forcing commuters into their cars or onto their feet. But that’s the least of it. Hospitals and power plants will operate on skeleton staff for the next three days. Law courts, operating on one-hour days for weeks now, will shut down altogether as lawyers take the week off.  Mechanics are also on strike. And all this will roll into a general strike tomorrow and on Wednesday.

Some of these professions - lawyers, judges, court clerks, taxi drivers, mechanics - are protesting against the liberalisation of their professions, the removal of barriers to entry. Others, such as public hospital doctors, nurses and ambulance drivers, are protesting against the umpteenth cut to their pay. For the first time Greece will also touch what are thought of as national security payrolls – the armed forces, police and coastguard, and the diplomatic corps.

The media will also take a symbolic day off in order to cover the climax of discontent tomorrow and on Wednesday, when the private and public sectors declare a general strike leading up to the parliament vote, expected on Wednesday night.

Yet the three-party ruling coalition, elected in June, is already being severely tested. The smallest member, Democratic Left, says it will not vote for the payroll and pension cuts Greece's so-called 'troika' of creditors demands. "Our insistence on labour issues has to do with our political conviction that the changes the troika is asking for have nothing to do with the country's solvency issues," its leader, Fotis Kouvelis, told reporters last night as he emerged from last-ditch talks with the conservative prime minister. He insisted that his party's stance against the measures "is in no way a choice to form the slightest rift within the government."

Democratic Left's stance is in turn triggering defections in the larger and more critical government ally in terms of parliamentary seats, the socialist Pasok party. Their leader, Evangelos Venizelos, is standing firm with Prime Minister Antonis Samaras in backing the measures, but that means he is at odds with many of his MPs. Already two leading deputies, Mimis Androulakis and Kostas Skandalidis, have said they will not vote for the labour measures, while a third, Mihalis Kassis, seems to have declared himself an independent after saying he will not vote for the measures."I will not vote for measures and policies that further deepen the recession, burden the poor and endanger social cohesion," Kassis said in a statement on his website.

On October 31 Venizelos admonished his MPs for not unanimously ratifying a series of privatisations Greece has promised to carry out. "I call upon this parliamentary bloc to clarify ... that Pasok, through its position in parliament, will secure the stable and responsible course of the country."

Skandalidis' response was that the government had betrayed its promises to voters."The measures violently render Greece a land of cheap labour, of property gutted of value, of zero resistance to the new economic imperium and the predominance of finance and capital; a country brought to its knees, a vassal for the foreseeable future, with no practical guarantee that things will ever change."

There is a precedent for the problems of both junior coalition partners in the triumvirate of Loukas Papademos, a technocrat prime minister who ruled from November 2011 to May 2012, when the political system found itself at an impasse.

Then, Laos, the small right-wing party, advised its MPs to vote against the austerity measures it helped negotiate, and was subsequently voted into oblivion. Kouvelis is evidently avoiding a last-minute turnaround that would make his party appear self-contradictory. But he has put himself in an untenable position of internal opposition to the policies of the government of which he forms an integral part.

Pasok now occupies the position the conservative New Democracy had in that triumvirate. It fields no cabinet ministers (ND fielded two, but in largely symbolic positions) and tried to maintain an ambivalent position of backing a limited government agenda while keeping its broader options open with respect to an upcoming election. But polls are suggesting that the embracing of austerity politics even from such a junior position is seen by voters as a commitment, and is hurting Pasok now as much as it hurt New Democracy then. The lesson: You can't have it both ways.
Posted by John T Psaropoulos at Monday, November 05, 2012