German Chancellor Angela Merkel is to visit Athens for the first time in an official capacity today, as the government of Antonis Samaras prepares to vote through some 13.5 billion euro in budget cuts or new taxes. Nine billion of those measures are to be put to parliament at the end of the month, to come into force next year.

Security measures go beyond anything seen in at least two decades. Some seven thousand police are to be deployed, a quarter of the country's police force. The maximum force employed in the rallies of the past two years is about five thousand, and in order to achieve that number police had to denude suburban precincts of all but a guard and a duty officer, leaving them vulnerable to crime. To gather seven thousand, many police are additionally being bussed in from around the country. 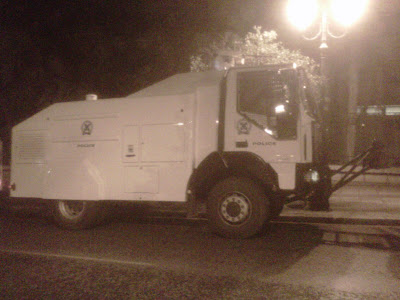 Law enforcers are also deploying a new weapon - last night, during a warm-up rally that was taking place outside parliament, police had discreetly parked five water cannon trucks on the other side of the building, out of sight of protesters. The trucks look brand new, and they sport what appears to be a snow plow-shaped bumper in front, presumably for crowd manipulation.

A third measure without recent precedent is that the government has revived a detested rule of the 1967-74 dictatorship, albeit for 24 hours, forbidding public gatherings with the intention of staging a protest along a swath of central Athens, stretching from the Temple of Zeus at the southern end to just shy of the defence ministry on the northern end. The area encloses the German, UK and US embassies, as well as a few  hotels (Athens Hilton, President and others), where the German Chancellor may rest.

The no-protest area does not affect Syntagma Square and the avenues leading to it, which are the usual theatre of spectacular protests before parliament. A large turnout is expected to express opposition to continued austerity, at the behest of the radical left opposition party, Syriza, and trade unions. Syriza leader Alexis Tsipras says he will attend the rally in person (at the start of the rally, at 1pm, well before any anarchic violence is expected) accompanied by a leader of the German left wing party Die Linke, which Syriza has been cultivating since winning 27 percent of the popular vote in June.

She will not be here long; Prime Minister Antonis Samaras will ceremonially receive her at Athens airport at 1:30pm. Their meeting at his office begins three quarters of an hour later, and statements to the press will follow. Frau Merkel will then go across the street to visit President Karolos Papoulias at 4:45, and at 5:30 is due to meet members of the Greek-German commercial community. She then flies out without staying the night.

Buses and trolley buses will be out of service from 11am to 4pm, and six central Metro stations will close after 10am until further notice. (The stations are Panepistimio, Syntagma, Evangelismos, Megaro Mousikis,  Ambelokipoi, Katehaki).
Posted by John T Psaropoulos at Tuesday, October 09, 2012