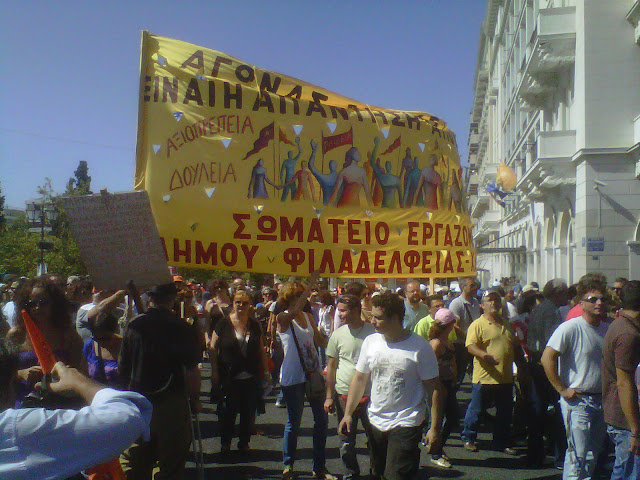 Municipal workers from the neighbourhood of Nea Philadelpheia in Athens join the marchers on Syntagma Square.

Younger, angrier protesters replaced the morning’s peaceful march in Athens, after police teargas thousands off Syntagma square in front of parliament. The message was also different. “We’re not afraid of teargas and arrests,” they chanted.

Teenagers stretched their T-shirts over their noses to help keep out the acrid smoke as a pavilion burned in the centre of the square, and teargas continued to waft over the crowd. Broken glass,  sticks separated from their placards and empty plastic water bottles were strewn in front of the square’s luxury hotels.

Greece is bracing for 15 billion dollars in new spending cuts, billed as the last round of austerity to balance the budget. If the measures fail to pass through parliament, Greece would lose bailout instalments that allow it to pay state salaries and pensions.
This was the three month-old, conservative-led government’s first general strike. Conservative New Democracy was once the party that opposed the bailout programme, but has over the last year become its champion, describing it as Greece’s only hope of staying in the eurozone.

Central and local government ground to a halt. So did schools, universities and banks. Hospitals operated on skeleton staff. Passenger ships were tied up in port, and shops rolled down their blinds.

“We won’t pay,” peaceful protesters earlier chanted outside parliament, echoing a popular sentiment towards tax inspectors and Greece’s overseas creditors. “The junta did not end in 1973,” they said in reference to Greece’s seven-year dictatorship. “We will end it on this square.”

The government says the 11.9 billion euro austerity package it is about to unveil will be the country’s last. But few on the street believe this talk of finality; fewer still believe the cuts will help turn around this stricken economy. After four straight years of recession, and with unemployment among the young at over 50 percent, the climate is paranoid and insecure. Many Greeks believe the bailout was designed to protect banks by ensuring that Greece would not default. It is not, perhaps, surprising that most people expect many more years of hardship.
Posted by John T Psaropoulos at Wednesday, September 26, 2012