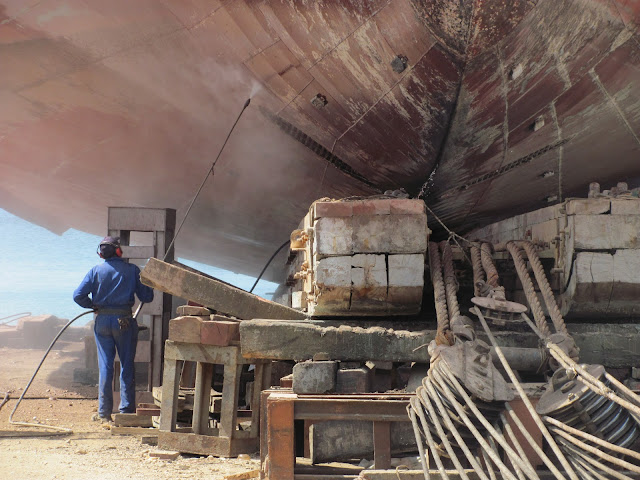 The Chop-Chop café on Athens’ western outskirts no longer lives up to its name. Time is the only luxury here, where men with little work, no money and a mountain of debt live out the sunset of their shipbuilding careers. Across the street, skeleton crews carry out maintenance on a few dozen luxury yachts and a handful of passenger ships, but the lucrative days of construction and major refits are gone.

“I’m waiting for an aunt to kick off and leave me with a property or two,” says turner Spyros Germenis, 57, who supports a wife and teenaged daughter. He is only half joking. He hasn’t worked in a year and a half, and his savings are running out. Beside him sits ship’s carpenter Dimitris Kasdaklis, 60, and father of three. “We live off spaghetti and rice. Occasionally I find a chicken for a couple of euros. But we live off the charity of friends and a tab at the café. We’re talking about utter degradation.” Kasdaklis no longer has a phone line, and fears he will soon lose electricity too.

The collapse of Greece’s ship repair and shipbuilding industry has left four in ten people jobless in the municipality of Perama, half an hour’s drive from the centre of Athens. In the industry itself, more than 90 percent are jobless. That has triggered a humanitarian crisis. While public hospitals will generally treat even the uninsured, there is no state machinery to provide the needy with food and medicine.

The local church now runs a soup kitchen and the municipality has stepped in with a free supermarket, stocked with goods that are withdrawn from retail shelves as they approach their sell-by date. A free pharmacy and municipal soup kitchen are soon to be added. But it is not enough.

Perama’s mayor, a co-founder of the Greek chapter of Doctors of the World, helped set up a local centre that regularly hands out food, medicine and clothing. Volunteer doctors hold surgery hours for free.

But the real challenge is to bring back jobs. By tonnage, Greeks own a phenomenal 16 percent the world’s merchant fleet – the largest proportion controlled by a single nation. Since the turn of the century, shipping has brought about 150 billion euro into the Greek economy. Almost none of that was in ship building and repair.  Shipyard owners in Perama blame the rigid labour regime imposed by unions.

“If the unions were to shut down, the work would increase geometrically,” says Vasilis Halkitis, a third-generation shipyard owner. “There are Greek shipowners who want to come here and won’t because of the unions.” Halkitis was forced to let a third of his workforce go in the last two years, but held onto anyone he has employed for longer than 15 years. “They are family,” he says.

As he spoke, dozens of carpenters picketed his yard, angry that one of his subcontractors is boycotting union labour. A new law, passed as part of a controversial reform package in February, allows employers to draft individual contracts with each employee and ignore union wage agreements.

Riding a backlash against pay cuts that could translate into gains for the radical left in Greece’s upcoming election this month, the unions are fighting back. “The unions have made a stencil contract that they hold up to us and say, ‘if you don’t sign it you can’t work’,” says Halkitis’ subcontractor, Stavros Bourikos. Were he to give in, he would lose the right to choose his workers and his labour costs would rise. “The union doesn’t allow overtime and forces you to take on more workers instead,” he said.

Those costs may not at first seem uncompetitive. The best paid workers take home 97 euro per day; but the daily cost from the employer’s point of view rockets to 260 euro because of social security, union fees, clothing and vacation allowances, plus the fact that union labour must be paid six daily wages for a 35 hour week.

“People need to continue to receive their basic salary because they only get 150-200 work days a year and can barely make ends meet,” says shipyard owner, Yiorgos Frantzis, who has shed ninety percent of his workforce during the crisis. But, he says, “we need to bring the cost of labour down by 50 percent. It can be done.” Frantzis proposes cutting social security contributions by half and removing other perks; but unions insist that labour cost is not the bogeyman.

“Employers are trying to drop daily wages to such a low level that they will spiral out of control,” says the ship carpenters’ union leader, Vasilis Binos. “It means that some people are going to have to leave the profession, so if employers get their way, they won’t be able to hire people anyway.”

Binos blames poor government planning. Perama’s shipyards are small. They have no floating docks and share a single dry dock. They have traditionally depended on subcontracted work from the two major shipyards that flank them – Elefsis and Hellenic. But these yards now send little or no work to Perama. The European Union has barred Hellenic from commercial ship repairs because it is favoured for defence contracts, and Elefsis has very little business. That has left the Perama yards catering to a limited market of recreational yachts and the occasional ferry maintenance. The real treasure – the 264 million deadweight tonne, Greek-owned merchant fleet - sails past them.

“The number of Greek ships trading in the Mediterranean is no longer as high as it was, and a Greek shipowner always plans his drydocking along his trading routes,” says David Glass, an industry analyst who runs the online journal Newsfront/Naftiliaki. But he agrees that unions have played a role. “There’s no doubt they’re excellent craftsmen. But there are delays, there’s uncertainty.”

Union leaders like Binos also deny that strikes have anything to do with shipyards’ demise. “Strikes are a right. They have nothing to do with delivery times,” he says. “Anyone who says so is a liar. We will reopen Hellenic Shipyards. It may take 15 governments. We will see them all off, no matter what the EU says. Hellenic will work again because we want it to.”

Perama’s current mayor is less optimistic about the area’s chances of reviving the yards. He is already seeking investment in new industries. “Our municipality is forgotten and forsaken. Tourism would develop commerce, bring business to our shops, improve our roads, bring income,” says Pantelis Zoumboulis, who faces a 200,000 euro monthly budget shortfall and has trouble making the municipal payroll.

He has earmarked a site currently taken up by oil storage tanks for a shopping mall, maternity clinic and an extension of Peiraieus University. But his pet project is a million square metre park on the top of Mount Aigaleo that would connect to a yachting marina. “We would have sporting facilities, a spa, even a casino and restaurant,” he says.  The marina would be a natural fit with the shipyards.

Perama is perhaps Greece’s most important historic shore. It is from here that the ancient Athenians sent their women and children across a narrow strait to safety on the island of Salamis, while they manned their ships to defeat a vastly superior Persian fleet in 480 BC. The Athenian victory at the Battle of Salamis was due to Themistokles’ correct reading of an oracle advising them to “trust in their wooden walls.” Those who took these to be the city walls perished in the sacking of Athens. Those who put their trust in the city’s brand new fleet returned to rebuild the razed city.

Perama is similarly perched between old interpretations and new. Its unions insist on rebuilding the ship repair industry. Its mayor sees a future in offering recreation to a congested city. A new Battle of Salamis looms.
Posted by John T Psaropoulos at Monday, June 04, 2012