An edited version of this story was published by Al Jazeera. 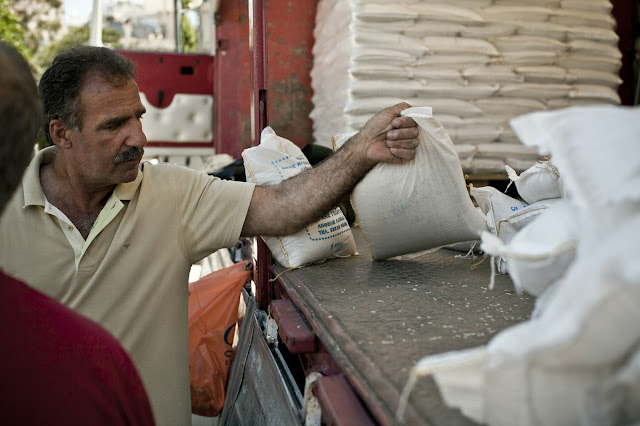 Rice grower Yiorgos Tsigas unloads five-kilo sacks to sell at cost price. "If it weren’t for the movement we would have a problem… rice gets left in our store rooms because there is competition from imports; traders don’t pay as much as they should and often pay in four- or six-month cheques. We used to get 110c-120c per kilo. Now we get 100c.(Photo by Anna Psaroudaki).

IT HAS GONE largely unnoticed that during its worst recession in living memory, Greece has also preserved a positive rate of inflation. When an economy shrinks, prices are meant to go down as demand falls. This has not happened - at least not yet. While the Greek economy shrank by an average of five percent a year in 2009-11, consumer prices rose by an average 3.7 percent a year.

The combination of falling revenues and rising prices has led to an explosive political mix. It is not politicians but grassroots activism that has come to address this issue. Last April the Greek Statistical Service reported a 24.6 percent drop in annual potato prices – the largest ever one-year drop in any commodity. The reason for this historic bit of deflation was what has come to be known as the potato movement, and it is having an empowering effect on Greeks not only as consumers but also as citizens and voters.

The movement’s various manifestations spring from one seminal event. The eye of the potato, so to speak, was a free distribution of more than ten tonnes of spuds in the centre of Greece’s northern metropolis, Thessaloniki, on February 5. It was organised by a group of farmers from the village of Nevrokopi, Greece’s potato-growing capital, situated on the border with Bulgaria.

The farmers were protesting against imports of Egyptian potatoes while they had barns full of the Greek product, after a meeting between the agriculture minister and potato importers days earlier failed to yield any concessions.

The first to invite the farmers of Nevrokopi to sell their potatoes at wholesale prices was the Pieria Prefecture Voluntary Action Group, based in the northern Greek town of Katerini, on the foothills of Mount Olympus.

The Group had been formed in late 2007, after a series of wildfires devastated Greece’s forests. Its founder, Ilias Tsolakidis, says he wanted to provide the fire service with an early warning system. Tsolakidis and his friends mobilised some 200 Katerini families to monitor the mountain around the clock through the summer. “We reported 23 fires and the fire service nipped them all in the bud,” Tsolakidis says, but “when the summer of 2008 was over we felt we needed something to do.” . The Group was already busy creating a free supermarket for the destitute when it heard of the potato handout in Thessaloniki. On February 19, it organised a sale of potatoes to the Katerini public at 25 cents a kilo - one third of market price.

Days later, the movement spread to Thessaloniki’s Aristotelian University. Christos Kamenidis, a professor of agricultural marketing, organised a sale of potatoes on campus using student volunteers. “I was worried that we would sell three or four tonnes. We sold fifty tonnes on the first day,” Kamenidis says. “People just fell upon the produce. The producers couldn’t cope with demand.” Kamenidis describes the queues these sales have generated as being “like a pilgrimage or a prostration”. The entire greater Thessaloniki area now holds regular sales of cheap produce, and the movement has spread south to the capital, Athens, and beyond.

The potato movement is changing the food market. “Competition has increased,” says Kamenidis. “The stores that once sold for 75c are selling for 45c, and I heard prices as low as 19c.” And the effect has not been limited to potatoes. Other basic durable goods such as olive oil, flour, rice and honey have also gone on sale directly from producers, undercutting market prices by half.

The potato movement is giving renewed impetus to two institutions that ought to have channelled market economics in hard times but didn’t. Farmers’ cooperatives were set up in the 1980s to give producers the clout to compete with wholesalers. “Cooperatives have the ability to sweep wholesalers aside, but they don’t sell any cheaper,” says Kamenidis. “They mark up produce even more. It’s a tragic and unacceptable mistake.” Farmers’ markets, set up throughout Greece to help producers compete with retailers, fell prey to the same greed. “Producers have succumbed to the logic of the market. They are trying to gouge consumers in the same way as middlemen,”says Tsolakidis.

The potato movement has not gone unchallenged. “Now there is a war breaking out,” Tsolakidis says. “The potato sorting and packaging centres are raising their prices to producers.” Controlled by wholesalers, the centres are using their leverage to inflate producers’ overheads. His Group is now asking potato growers to package in the field.

There are other problems. Even in these desperate times, not all producers recognised the opportunity of the potato movement they helped start, says Foteini Arnaoutoglou, a potato farmer and local organiser in the village of Vrontou, near Nevrokopi.

“Many of my fellow villagers did not believe in the movement. They thought the price was too low,” she says. “Some made fun of us. And many people thought they would wait for us to exhaust our supplies at the low price, and hold out for a higher price. They thought they were being cunning.”

Arnaoutoglou and the growers she coordinates sold their potatoes at the cost price of 25c a kilo, and have the cash in hand to sow next year’s crop. The holdouts are stuck with potatoes they may have to sell over the border to Bulgarian middlemen for 10c a kilo, or with cheques and IOUs from Greek middlemen that haven’t been honoured in two years.

Even when farmers do pull together and establish a viable cooperative, their existence is precarious explains Tasos Antoniou, a 31 year-old dairy farmer from the village of Leivadi on Mount Olympus. “There are cartels. All the dairy companies trade on the same price basis each year. It is very rare to see differences between them, and it only happens when a company is trying to squeeze small cheese producers out of the market.” He and a small band of young farmers have formed a cooperative that sells directly to shops or through the potato movement. But since they have only found markets for a third of their capacity, they are vulnerable to a price attack.

Antoniou points out that without the crisis there would be no change in consumer attitudes to support Greek products. “I am optimistic that our cooperative will do quite well, and we shall fight through the difficult years.” His cooperative has gained a toehold among Belgian delicatessen stores, and Arnaoutoglou is building a site to sell directly to the public, or wholesale overseas.

Perhaps the fostering of this can-do spirit is the potato movement’s most lasting – and subtle – contribution to Greek culture. It has already begun to transform civic attitudes in Katerini. “It takes me an hour to walk a kilometre from my house to the centre of town because people stop me and the other volunteers and beg us to take over the local government,” says Tsolakidis. “This happens every day. They see this movement as something very hopeful.”

Tsolakidis estimates that anyone who participated in all the food sales the Group organised benefited to the tune of 100-120 euros. Combined with the Group’s organisational power, its appeal makes it politically subversive. “We can mobilise more people than anyone else,” says Tsolakidis. “We receive about 5,500 orders for each sale of produce representing about 45,000 people, or 55% of the population of our town….Political gatherings are lucky if they get 50 people.”

Local politicians now queue to sign up for firewatch duty, Tsolakidis says. “But this is how we see our role as citizens. With my behaviour I determine the behaviour of those in power. Perhaps the fire vigils on Olympus sensitized them. But we did that. So we cannot organise things like the potato movement and not have an opinion about local or national politics. It would be contradictory.”

Even in places where the potato movement has nestled directly in the folds of political power, that power is tinged with anti-authoritarianism and an emphasis on individual empowerment.

“We are completely unsupported by any political party,” says Loukas Tzanis, a pharmacist who last year took the reins of Keratsini-Drapetsona, Athens’ largest working class municipality. “I think this shows that people need independent, authentic expression in local government. We did not come to hold sway over the city, but to serve the city.”

Tzanis and his team have plunged into a series of social measures. They have secured European Union funds to assist poor children and battered women, and have already organised six distributions of rice, flour, potatoes and oil on the town’s main square.

Tzanis has also defied powers greater than himself to raise his voters’ quality of life. He recently bulldozed his way to a municipal waterfront leased to the Peiraieus Port Authority, a wealthy public company that runs the country’s largest container terminals in collaboration with China’s COSCO, and is organising children’s activities there.

Tzanis is in talks with Formula One to recast his municipality’s coastal highway, already highly developed for truck traffic, as a racetrack abutted by parks. His goal is nothing less than a recreation economy built from scratch to tame a 50% unemployment rate.

In Thessaloniki, Katerini and Keratsini-Drapetsona, the potato movement is championed by those who have understood the sea change in Greek values: independence from party and special interests, and a dedication to public service. “I would like to see our mayor dig, or unload a sack of potatoes and put it in an old lady’s trunk,” says Tsolakidis. “He doesn’t get it. He thinks his role is to go around in a tie.” Kamenidis is similarly strident about Greece’s parliamentarians: “Political life in our country needs to change. They need to step aside of their own accord and people who can help need to come in. Members of parliament should not be paid.”

Tzanis, who has travelled from the bottom up to win election without party backing, would appear to represent the new type of politician. The new values may be limited to grassroots activism and local government today, but judging by the ferocity with which Greek party hierarchies are being shaken, it may only be a matter of time before they reach the top.

Greece’s Potatoes have perhaps always been rooted in a sense of subversion as well as democracy. They were first cultivated during the Greek War of Independence in the early nineteenth century, and became a staple of the new nation. Greece’s first prime minister, Ioannis Kapodistrias, is said to have tried to popularise them by handing them out for planting. Suspicious of anything that was given to them, the apocryphal story goes, the Greeks shunned the new fruit. So Kapodistrias placed the potatoes under armed guard, ordering the sentries to turn a blind eye to looters. Within days the spuds had disappeared into nearby fields. Perhaps potatoes have again come to symbolise a commodity as widespread as the thirst for democracy, but one that has to be procured in spite of authority.
Posted by John T Psaropoulos at Monday, June 11, 2012