A different version of this story can be viewed on CNN.com

The football violence that damaged Athens' Olympic Stadium on Sunday night damaged three institutions: the stadium where Greece hosted the 2004 Olympics, and Greece's two most accomplished football teams.It also bears the same troubling hallmarks of clashes in central Athens during political protests: underemployed gangs of young men with a vendetta against police.

Police say they were provoked by “a large group” throwing sticks, stones, bits of metal, Molotov cocktails and flares. The clashes began two hours before a match between Greece’s two main football clubs, Panathinaikos and Olympiakos, was due to begin.

“Before the match, individuals who had already gained entry made a sortie from their stands, breaking stadium doors, attacking police and allowing others to enter without security checks,” a police statement said.  “There was a large group of fans that tried to get into the stadium through the basketball courts without tickets,” explained one Panathinaikos fan who was present.

The violence resumed inside the stadium at half time, when dozens of Panathinaikos fans stormed police lines. The second half of the match started almost an hour late and was cut short by several minutes when fans started raining Molotov cocktails on the stadium. They ripped up seats and partly burned one of the stadium’s two giant digital display boards (photo). 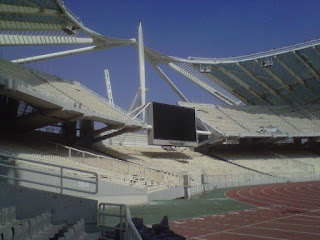 Police later displayed pictures of seized Molotov cocktails and flares. They also seized three, 16-litre canisters of inflammable fluid that had been placed outside the stadium doors, presumably for the resupply of troublesome fans.

The stadium is a symbol of a modern Greek moment of glory. It hosted track and field events during the highly successful 2004 Athens Olympic Games. But it was never built to host soccer matches. It lacks turnstyles and heavy-duty security doors. Cleanup crews were on Monday piling up broken plastic chairs and railings onto the brick-red rubber track and cleaning up debris with leaf blowers. The display board was visibly charred, and splotches of dried blood adorned the aisles.

“When these groups can get away with such things, it is because they were able to get away with them in the past, with no one being punished” said Public Order Minister Mihalis Chrysohoidis on Skai, a local network.

Panathinaikos FC issued a formal apology for the violent clashes, and could be fined. Together with Olympiakos it forms Greece’s football powerhouse. The two clubs are, with few exceptions, the only ones to represent Greece in European leagues; but rivalry between their fans has plumbed such violent depths that they are no longer allowed to attend matches simultaneously, and are confined to home matches.

“The violence may have been partly provoked by the heavy police presence,” said a fan. “There were seven busloads of police at the game.” But police may have arrived in such numbers anticipating an organized act of violence. “We knew it was going to happen,” said taxi driver Konstantinos Kavdas, a Panathinaikos follower. “One of the more extreme fan clubs was going to pay the police back for heavy-handed behavior during one of their basketball matches last week,” he said.

Greek football teams do have official fan clubs, but the vast majority of fans belong to independently groups not controlled by the teams.
Posted by John T Psaropoulos at Tuesday, March 20, 2012