Parliament’s uproarious debate ended in a victory the government may not have dared hope for, winning almost two thirds of the 300 seat legislature, even though it aimed for only an absolute majority of 151.

The Greek finance minister can now go to the eurogroup on Wednesday armed with a powerful legislative endorsement and, hopefully, signed commitments from the two party leaders to see through the controversial austerity package. It will cut minimum wage by 22 percent and eliminate 150,000 jobs from the public sector.

This seal from parliament may help alleviate some people's concerns about the legitimacy of this government to impose further austerity. But that boon was counterbalanced by the cost of the vote. The socialists and conservatives who form the governing coalition also suffered defections and abstentions from the party line. Some 43 MPs were punished with dismissal from the two parties, while two dismissals came from right-wing Laos. (Laos had been part of the governing coalition intil Friday, when its leader, Yiorgos Karatzaferis, declared he would instruct his 16 MPs to vote down the austerity package he had a hand in negotiating). This means that parliament now has more independent MPs than at any other time in the four decades since democracy was restored. These can now be expected to campaign, as backbenchers, against austerity. New Democracy alone shed about a quarter of its seats.

The coalition was formed after the socialist government suffered so many defections in November last year over its leader's controversial idea of holding a referendum over the second bailout, that it needed conservative support to legitimise the second bailout plan. But the socialists and conservatives, who won a total of 77 percent of the vote in 2009, today poll a mere 30-odd percent. The socialists' drop has been particularly precipitous, from 44 percent to eight or nine. Since it is their mandate the entire coalition is based on, there is an increasingly strong current of public opinion in favour of elections now - some 61 percent according to a poll published in To Paron today. That is a sharp upturn from last year, when most Greeks wanted stability rather than the roller coaster of a hung parliament. 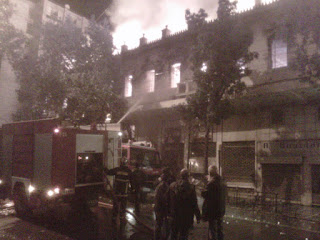 Outside, on the streets of Athens, the government's legitimacy was called into question more strongly. Close to 100,000 peaceful marchers convened on Syntagma square before parliament, and central avenues.They were soon overshadowed by violent protesters.

After a battle outside parliament lasting hours, police reclaimed control of Athens’ central square. They sent tens of thousands of peaceful marchers scurrying down central avenues. Disguised among them went the violent demonstrators, creating a diaspora of destruction. At least two banks were set to the torch, their steel portcullises prised open, their computers visible smouldering inside. Throughout the centre streets were covered with the gravel of smashed plate glass and broken marble that had been ripped off the front of buildings to be used as missiles against police. As many as 50 demonstrators were reportedly lightly wounded. As lawmakers emerged from parliament, many called for the resignation of the public order minister.

The parliamentary vote was as follows:
278 MPs voted in total
199 voted yes in principle to the measures
74 voted no
5 voted present
Posted by John T Psaropoulos at Monday, February 13, 2012