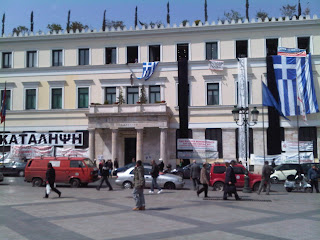 Never in over a generation has a Greek government asked its voters to accept pay cuts from the public sector. Now local government has faced the harsh reality of not renewing contract hires, amounting to 25,000 layoffs. (Municipal workers occupied city hall, seen in this photo on March 30, blaring music from the windows and being as ostentatiously idle as possible). The question of layoffs is now sneaking closer to loss-making state enterprises, which are no longer to live off the state bounty. All this is being done under the dictates of our new troika of creditors, the European Central Bank, the International Monetary Fund and the European Commission. Perhaps the terms seem colonial, but Greece is only being asked to do what it has avoided doing for over a decade, against its better judgment.

If the woes of the present seem insurmountable, we need only look at the difficulties from which Greece has extricated itself in the past. Greece is recorded as having bankrupted itself no fewer than eight times in its nearly 200 years of independence; but it has never been more precariously perched than it was during its struggle for that independence. The process of raising two revolutionary loans for the fight against the Ottoman Empire is instructive. Greece’s present indebtedness to banks and stockholders around the world began with its very inception and was due to poor money management and a weak political centre.

As William St. Clair tells us in his classic story of the Philhellenes’ part in the revolution, That Greece Might Still Be Free (1972), the first revolutionary loan was floated in London in 1824 and was nominally valued at 800,000 pounds sterling. But its shares were issued at a 41 percent discount, so an investor only needed to pay 59 pounds to secure a 100 pound share. Greece was under further obligation to pay the shareholders a five percent annual interest rate, the first two years’ worth of which was withheld at source. To cap it all, the loan’s brokers, Messrs. Loughnam, Son, and O’Brien, extracted 38,000 pounds in “commissions and expenses”. Thus, out of an 800,000 pound loan, only 300,000 were available to the Greek cause – and that only on paper as investors were only asked to pay 10 pounds of the 59 in advance, the rest being payable in instalments. In the event, 80,000 pounds were dispatched to Greece.

On the back of the bonds was written, “To the payment of the annuities are appropriated all the revenues of Greece. The whole of the national property of Greece is hereby pledged to the holders of all obligations granted in virtue of this loan...”.

If the terms of this first loan seem colonial, the second, floated exactly a year later, was additonally marked by rampant corruption. It was valued at 980,000 pounds, but St. Clair tells us that 113,000 were spent boosting the value of the previous loan, whose trading value had fallen from 59 to 54 pounds, “in other words playing the market in order to keep the price up, an activity affording innumerable opportunities for the exchanging of favours and the lining of pockets.” Hundreds of thousands of pounds were spent on an abortive scheme to build a Greek fleet; and the London Greek Committee’s British and Greek directors simply embezzled large sums. “For example,” says St. Clair, “a sum of 2,695 pounds was charged as lost owing to the failure of a Greek merchant in London: the merchant’s books showed only 500 pounds. The sum of 1,200 pounds was credited as received from Calcutta from a subscription there, but the Calcutta accounts showed that 2,200 pounds was sent.”

Once the money did become available to Alexandros Mavrokordatos, the nominal head of the Greek civilian government, he was forced to spend it on the personal militias built up by the captains who effectively comprised the revolutionary fighting force and could blackmail the weak central government. Rather than entering the market and creating an economy, the money was stashed away in a relatively small number of households.

It is highly doubtful, in sum, that Greece’s first borrowings had any beneficial effect on its development. Quite the opposite, in fact, is likely. The bondholders of the two Greek loans, whose value collapsed as Greece never made a single interest payment, made sure that the newly independent country was barred from ever gaining credit in Europe’s stock markets until 1878. Greece’s debt on 1.78 million pounds’ worth of capital had by then accrued to more than 10 million pounds. As the country was running an irreducible deficit it became apparent that it would never schedule repayments, and the bondholders compromised on a write-down for all interest payments hitherto due in return for the issuing of 1.2 million pounds’ worth of new bonds at five percent. It was a severe haircut for Greece’s creditors on loans that had done Greece little good.

Greece had, in 1824 and 1825, benefited from a speculative wave in the fortunes of far-flung states. That wave was not born of a sudden altruism on the behalf of struggling peoples. It came about because the Bank of England reduced the interest paid on its bonds from five percent to 3.5 percent, leaving speculators looking for higher returns but ignoring the higher risk. The speculative bubble collapsed with the Bank of England bailing out investors and banks. Both in the 19th century and recently, therefore, Greece has simply been the victim of the combined venality and greed of its own politicians and that of the banking system.

Nor would this be the last such collapse in creditworthiness. As Professor Thanos Veremis recently wrote, Greece’s nation building prime minister, Harilaos Trikoupis, would avail himself of loans at the end of the 19th century, a time when Western banks were looking for new business on the periphery of Europe to counter a recession at home. Once again he would lead Greece to overborrowing and bankruptcy; but Trikoupis managed the loans in such a way as to leave Greece with its first serious infrastructure in road, rail and harbours, in an effort to render Greece’s agricultural produce exportable.

Trikoupis’ bankruptcy may have led to years of stagnation, but it also generated economic growth. The lesson seems clear: Economic cycles and speculation may cause periodic collapses in growth and credit, but they will be most strongly positioned to weather such collapses who have quietly spent the good times building real value into their economies. Money, equities and bonds rise and fall; productivity and competitiveness cannot be argued with.