The tally of destruction 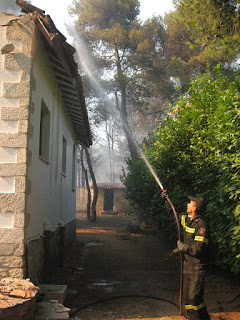 The fires that struck Attica last weekend have resulted in millions of euros' worth of damage - and a heavy political price tag, too.

Greece's public works ministry says 65 homes were completely destroyed by last weekend's wildfire east of Athens, and a further 143 partly destroyed. The blaze tore through more than 2,000 hectares (200,000 stremmata or 50,000 acres) of pine forest according to a preliminary tally by the Word Wide Fund for Nature (WWF) after the fire service lost control of what had begun as a small fire on Friday 21 August.

The fallout is now threatening the government's stability. The leading opposition socialist party has called the ruling conservatives genetically incompetent, and says it will force an election next March; that's when the conservatives need bipartisan support to elect a new president.

Unless the government makes progress in protecting the environment as well as surviving the economic crisis, its days could be numbered.

To hear my reports, as well as other news, go to www.npr.org (click on Hourly News).
Posted by John T Psaropoulos at Friday, August 28, 2009